Suns out, guns out! This couldn’t be more appropriate for the inaugural AHBA Sporting Clays Tournament sponsored by White Insurance Agency and Builders Mutual Insurance Company on March 15th.  After having snow the day before, we were happy to have 60-degree weather and blue skies, making a beautiful day at the Biltmore Sporting Clays Club. Lunch was a hit with wood fired pizzas and homemade soup provided by Wood Fired Oven. You can hear from Rob Fisher from White Insurance Agency on why he was excited to be this year’s sponsor here. 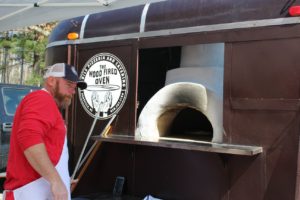 For the first year, the tournament was limited to 12 teams of 4 that sold out almost immediately. If players wanted to re-shoot a full station, they could purchase a mulligan with proceeds supported NC Build PAC. Contributors were also entered to win an outdoor gas griddle supplied by Blossman Gas. Robert Jacobelly was the lucky winner, but so was NC Build PAC with $1000 raised. With a 2018 goal for NC Build PAC is $7780, the Asheville HBA has raised over $3000 to date!

After teams shot on 12 different stations, individual and average team scores were added to determine the individual winner and the team winner. Wright Family Custom Homes team won the $250 cash prize with an average score of 82 and team member, Randy Hyatt, was the high scoring individual with an impressive score of 92 and a cash prize of $100. Did we mention, these scores were out of 100 total targets? Way to go, Team Wright Family Custom Homes. It also paid to shoot a low score because the lowest scoring team, PSNC, was awarded free lessons at the Biltmore Sporting Clays Club. Great job, everyone! 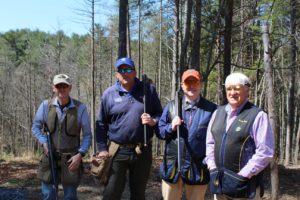 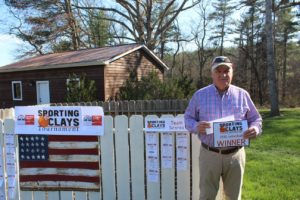 We suspect this will be another highly anticipated event for years to come. Team and sponsorship opportunities will fill up quickly, so be sure to watch for the event release next year! Thanks again to everyone who made the First Annual AHBA Sporting Clays Tournament a success! You can view all the photos from the event on the AHBA Facebook Page.